Here Be The Homo Monstrosus Magnus

This fiction aims to construct an analogy that could support multidisciplinary discussions. It will be necessary to take into account perspectives from organizational psychology, biology, anthropology and sociology. I hope that this playful, creative approach will entertain and educate the reader.

For 2,000 years most educated men believed that remote areas were inhabited by monstrous races. When Carl von Linne (Linnaeus) worked out his monumental classification of natural things in the 18th century, he included the species Homo monstrosus. 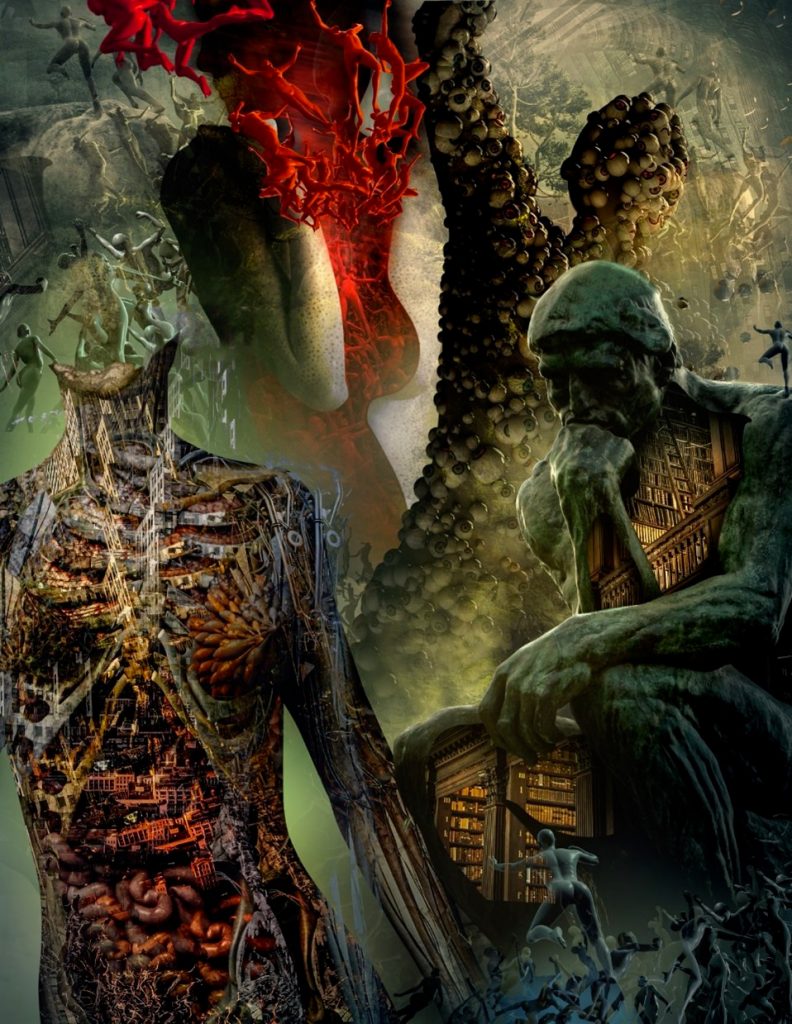 Figure 1. Diversity of the Giants

By Homo monstrosus, he meant a species related to Homo sapiens but physically different. He believed they were humans that acted, unlike anything he’d ever known. Homo monstrosus. A monstrous version of humanity imbued with special abilities but possessed by what appeared to be insanity. Some were more comfortable screaming their throats raw, others slept themselves to death. And still, others warred between themselves until there was no one left. It was only in the 19th century that it became clear that there were only one species of living men. But, looking over his shoulder, a colleague suggested something. Just a nudge in the right direction, and he was able to see a sliver of the truth. The model described below gives a Darwinian introduction to human societies. It explains why they’re so cooperative and why human psychology seems to include prosocial motivations. The existence of the homo monstrosus answers the need for a unified theory of social evolution, combining the logic of inclusive fitness theory with measures of response to selection at multiple levels. Through millennia of evolution, humans have made an impressive transition from primate colonies to a super existence. Now, they’ve discovered the homo monstrosus magnus. Not only is this species unique in its abilities, but it is also physically bigger. It is Magnus. 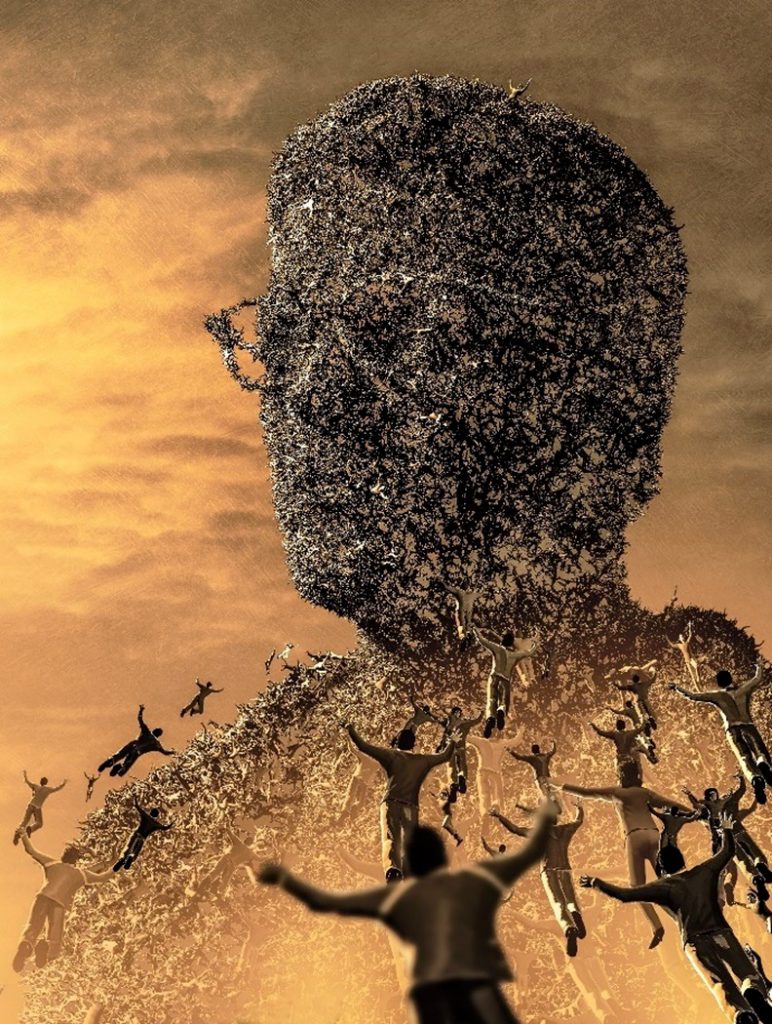 I stood at the top of the mountain road, watching the town below being forcefully organized. The monster’s pure black eyes were full of hunger, aching to grow. The iridescence, nearly a mirror sheen, distracted you from the powerful time gravity that surrounded the creature. If I squinted my eyes just right, a bald head and a wicked grin under a crown emerged. Under that, I could see arteries like tentacles pulsing across the isthmus. Poking out of the dark mind were some older buildings, remnants of another mind slowly being consumed, teased into the dark mind below. My imagination had each person in the world below carrying meaning for the wicked grin, with a burden on their back or a snarl on their face. One couldn’t imagine that this place was once the heart of a revolution.

The shiny eyes superimposed on the skyscrapers, shifting around the city, trying to find more innocents to absorb, into the cloud of anger and fear. It’s tentacles, four stories high reached out to the interstate, assimilating busses by the thousands. Broken glass scattered on its knuckles punctured tires and souls desperate to escape.

The tow trucks, lawyers, and policemen, eyes hidden under shadowed caps, dragged you back into the red anger. Yet, as always, it moved slowly, curled, scales shifting against the darkness. I could imagine a mountain of people holding hands, constantly screaming, crying, and deep guttural growls, forcing the snake of people forward. Like a snail’s slime, blood would lubricate its path as people were ground away from under the weight of the anger.

Eyes like windows held in place by dozens, glass cutting into the palms of their hands, tears of blood streaming down its face. Its fangs, recycle the metal bones of the city. Its back is covered with guns. Shiny new ones on top and rusted red ones falling off the dead hands in its body.

If it was real. . . I wondered how others survived in the belly of such a beast. I wondered what cavemen might have imagined the world was under such an avalanche of anger. Did they recognize the newly created organism that lived or died with each new relationship? How did that live on in stories, in tales spun around a fire at night? 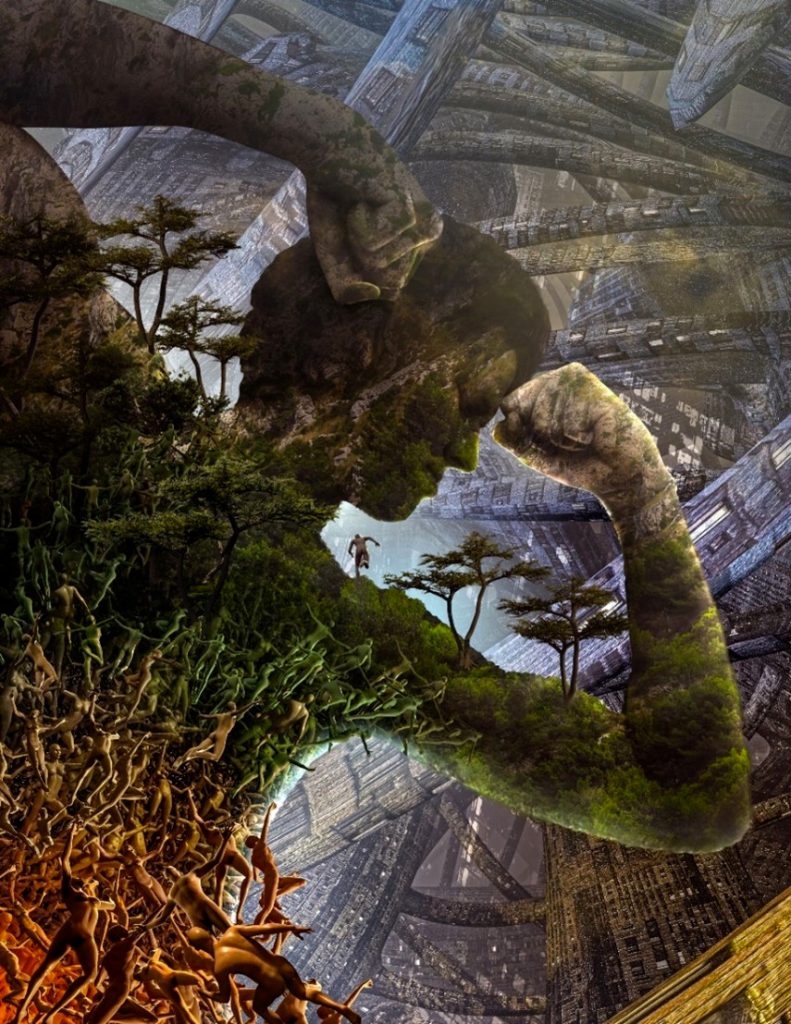 Juices leak from the giant homo monstrosus magnus’ seams. Its skin, composed of the hides and flesh of its victims, blends together with its coloured hair. It is crouching down, just started devouring one of it’s kills. The blood flows down its neck bathing its legs.

Terror arises as giant tentacles wrap around the next constituent and drag the screaming victim into the dark mass of bloody flesh, absorbing

As it lays down on the ground, it seems like the vegetation leans towards it. Like the whole world is bent in its direction. The sun went dark. The grass whitened.

Raw, the blood from the Monstrosus magnus pooled on the jungle floor, echoing the coiled muscles. The tentacles looped together, disguising the jungle’s secretions under its hair-like growth. Its millions of tiny hands, scrambling for the carcasses that were soaking in the marinade, tearing eyes away from skulls on the way to the juicy core of the Monstrosus magnus. 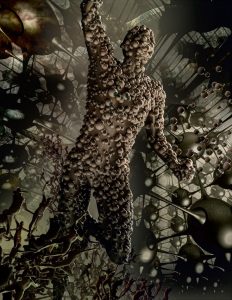 A large mass of thick, heavy, translucent slime fell onto my shoulders and burned my sinuses. Towering above me, hunched a menacing, dark creature. Its long, bony limbs grabbing onto the architecture to balance itself. The long and slender forelimbs poked out from the rest of the body, which sat on stout back legs. Its stubby arms lashed out, seeking flesh, and sometimes tearing at itself. It dropped and opened its jaw extremely wide, unfolding its spherical head almost like an onion, letting out a deep gurgle, and revealing rows upon rows of razor-sharp teeth. It clambered on its knuckles, which were covered in exposed and bloodied bones. Beneath and beside the bones, blood and flesh were human faces. It had come along way to scout. There will be more coming. It was a kind of unescapable burning sensation in your nose. The sting of pain ricocheting up and down your spine, every inhale was the renewed pain with the taste of rotting flesh left vacant in your mouth. Every exhale was incomprehensibly prolonged almost to the point of blackness. The air was stale and cold. Everybody turned and looked through the windows as the 50-foot-tall giant superorganism stood and cast its shadow on the largest Church in the world. In the corners, the shadows deepened. The first superorganism stepped out of the shadows with dark skin and an uncaring stare. The second superorganism hung back. It seemed to have thousands of eyes watching from the dark crevasses of its skin. With its head on a swivel, it seems to be on the lookout. It had one giant eye, like a cyclops, that would focus with intensity on any movement. It seemed to be designed out of a group of hypersensitive people. Any perceived movement or change would be captured. Although its strength and movement speed were questionable, you could sense that it wouldn’t miss anything. As I was looking towards it, I found one eye looking straight back at me.

The third superorganism apparently evolved into a super intelligent one. Smart people must had made up its knitted flesh. Its movements were fast, its flesh kept rolling, just as everyone contributed to the intelligence. Its shape was less human and more jelly-like, like an amoeba. It seemed to be aware of what was happening but also focused on other things at the same time.

You could see the man standing in front of the church tense up and un-roll his parchment. A discussion ensued, with the first superorganism sitting straight and calm, answering the man’s questions. The man’s gestures became more and more strident, and his voice rose. The voice of the superorganism seemed to be made of thousands of synchronized voices. Young, old, male, and female voices. The sound was beautiful and inviting. Sweat flew off his nose. The argument elevated into shouting and the manmade a fist. The superorganism picked him up and forced him into its large chest. He disappeared quickly.

End of Excerpt. To continue reading the full text, please click on the button below.