The role of anthropomorphic effects to global warming are examined and compared to the effects of greenhouse gases. It is shown that a significant reduction in temperature increases over the next decades can be achieved by a simple power shutdown a few days a year at the temperate seasons around the globe, this is in addition to reducing CO 2 emissions. The ’thermal battery’ needs only a couple days of discharge to reach climate change goals. Several models of climate change are investigated and mapped onto realistic parameters for the Earth and alternative suggestions for resolving climate change are proposed. We predict that turning off all power for even just a couple days every few months of the year removes the anthropomorphic effect to global warming and allows time for a significant percentage of earths heat to escape through the atmospheric window. Not everyone will need to turn their power off at the same day. Power reductions can be flexibly scheduled to any level.

Math and physics models are of great utility. They give us a basis for reasoning quantitatively about climate change. Despite this utility, many such models have not yet made it into the textbooks or popular literature, but remain scattered throughout the vast and technical scientific literature. Our aim here is to provide a self-contained treatment of these models which are particularly useful in examing a total system model. The intended audience are those with a math and physics background, and in particular scientists and engineers in other fields, who seek a basis for reasoning for themselves about climate change. Although there exist many statistically based models of earth’s warming, there is very little on rigorous physics derivations of global warming. The following discussions presents a physics model of anthropomorphic heat pilling in the earths atmosphere. A novel method to model the atmospheric warming by developing an RC circuit is shown. A model of anthropomorphic heat piling in the atmosphere is developed and investigated.

Compared to the sun, human contributions only produce trace amounts of heat energy, leaving climate scientists to dismiss waste kinetic heat as a cause of global warming. This is accurate until you look at the case of heat piling as described below. In the case of the Earth, we show that these anthropomorphic contributions and heat islands are much larger contributors to global warming than previously thought. From Newton’s Laws of Cooling (and Heating), it follows that the time it takes to cool is longer than the time it takes to heat. It is found that the rate of anthropomorphic heating is not in equilibrium with an- thropomorphic cooling. The earth’s thermal setpoint is adjusting to compensate to the unequal rate of change in heating and cooling. We propose a cool down period of a day or two every few months to allow the earth’s anthropomorphic set point to stabilize.

Globally we use an enormous amount of energy, somewhere in the range of about 150 trillion kilowatt hours a year. We assume that 50% of this energy gets converted to heat through inefficiency.Mankowski2019. This measurement only includes major measurable infrastructure. To get a sense of the relative scales involved, consider the following: the total amount of energy delivered by the sun to the Earth is approximately a million trillion (10 18) kilowatt hours a year. So on the scale of what the Earth receives from the sun, our energy use represents only about 0.015 percent of what is in principle actually available to us. Earth’s energy budget is vital in establishing the Earth’s climate. When the energy budget balances, the temperature on the Earth stays relatively constant, with no overall increase or decrease in average temperature. However, not all of this energy reaches the Earth’s atmosphere or surface as some is reflected by clouds or the atmosphere. The energy that does pass through is absorbed by the atmosphere or the surface, and then moves around through convection, evaporation, or in the form of latent heat. Today, the energy imbalance amounts to approximately 0.9W/m 2. That is to say, 0.9W/m 2more energy is coming in than is leaving the Earth. The current suggestion is that human activities and a resultant increase in carbon dioxide is the major cause for this imbalance. 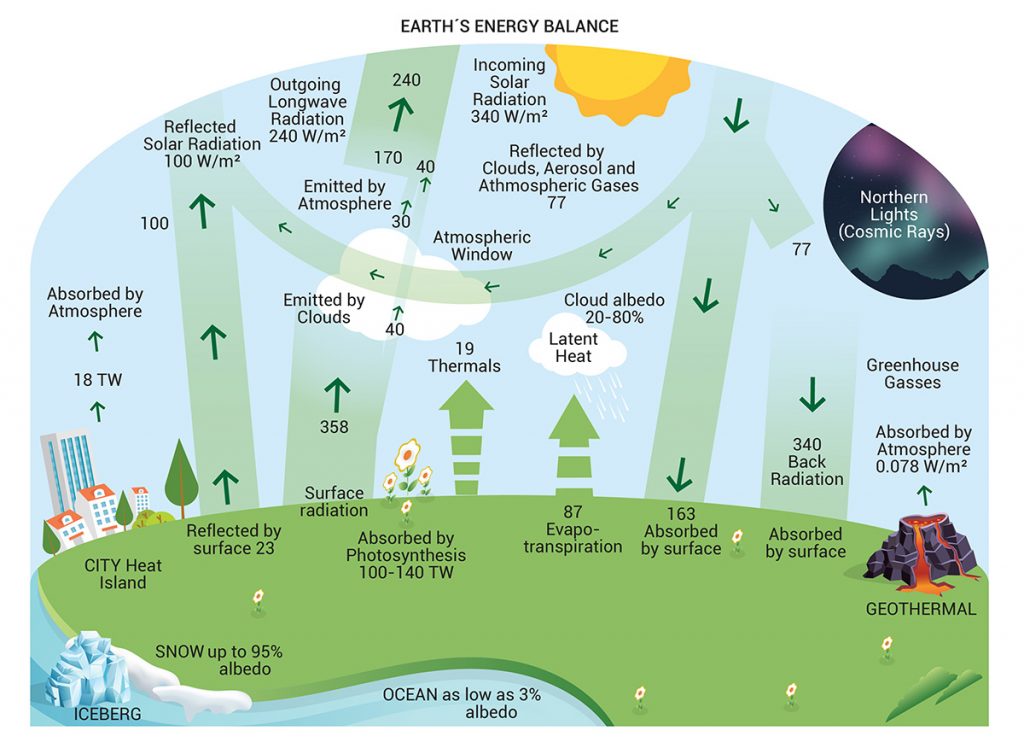 It may seem like an overwhelming task to model all the elements of global warming with predictive accuracy. It is not as simple as calculating a perfect thermal sphere. There are many variables and a high degree of complexity. To understand how a photon is emitting out into the vacuum of space and the dynamics of molecules requires a physics model. Since the Earth is insulated in the vacuum of space, like a spacecraft, we can’t eliminate heat without beam- ing it away as radiation. Unfortunately, the human race produces a significant amount of waste heat. Approximately 50% of the energy from human activity is wasted as thermal kinetic energy or heat, through electrical infrastructure, internal combustion engines, campfires and even body heat. With the elimina- tion of this kinetic heat being extremely difficult, and the production of kinetic heat at historical highs, we have a problem. Once kinetic heat energy is created inside a system, the molecules and atoms move and vibrate in that system un- til the energy is converted into infrared radiation. Because this energy “state change” takes time, this leads to a significant temperature increase inside every closed system. In the case of the Earth, we believe that it is a significant factor in global warming. As a simple example, the heat from your coffee cup will take 20 minutes to cool. We could calculate that the heat from your coffee and how it cools by infrared and kinetic energy then dispersion through the ceramic cup and its specific heat capacity. Then that heat would move up to the upper atmosphere and find the proper “optical window” for emission. This process takes about 18 hours (we calculate) and becomes a challenge if that heat piles by having an asymmetric heating and cooling rate.

Consider a globe being irradiated by the Sun with intensity I. The spherical globe is covered in a material/atmosphere that can reflect the light to prevent heating, but also with a certain blackbody constant (‘greyness coefficient’ ϵ) so that the material may absorb and re-emit the solar radiation to cool down. Hence we have two different thermal conductivities k 1, k 2, and the globe has anthropomorphic self-heating power P and initial inner surface temperature T i, with incoming solar radiation on the blackbody surface of coefficient ϵ and reflectivity r of some temperature T o.

In equilibrium, there must be no net heat flow across any isothermal surface, and so we have the following equalities at each of the boundaries:

From here T 1can be found immediately in terms of T oand T ifrom the middle equalities. The power P of the Earth’s heating is split into two parts, as it is not perfectly efficient as stated in the introduction. Half its power goes to heat, as a blackbody spectrum at a certain temperature T i. Plugging in the values for the solar irradiance given in the introduction, and taking T o→ 0 for the vacuum of space, we can find the shift in the blackbody spectrum.

I mentioned above the case where there is an atmospheric shell (we can model the edge of Earth’s atmosphere as a blackbody on one side as there is no conduction of heat into space, only radiation, but let’s simplify it further for now). In fact, this shell’s impact on the problem is purely geometrical as I state in this theorem:

Theorem: A spherical blackbody of radius r = R Earthat temperature T is surrounded by a thin atmospheric shell of radius R, treated as a blackbody on both sides. The factor by which this ‘atmosphere’ reduces the cooling of the Earth is given by R 2/(r 2+ R 2).

For an internal ‘atmosphere’ of temperature T 0, the rate of heat loss before the shell is placed is

To continue reading the full text, please click on the button below.